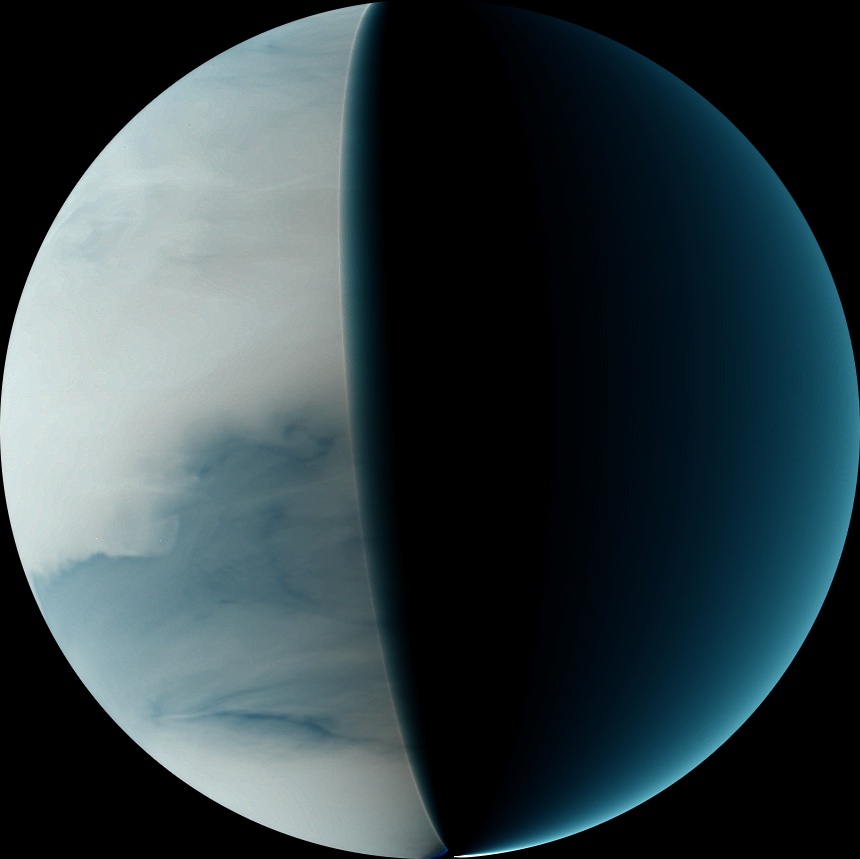 Lurking just below the atmosphere of Venus is a wall of acid clouds that whip around the planet at speeds close to that of a commercial air jet on Earth.

The newly discovered atmospheric “feature” looms about 31 miles (50 kilometers) below the thick cloud tops of Venus and is extensive, sometimes stretching as far as 4,660 miles (7,500 km) across the equator and mid-latitudes of Venus. And it’s been there for at least three decades.

It may seem odd that such a huge feature went undiscovered for so long, given that spacecraft have visited Venus sporadically since 1962, and high-resolution telescopes have been gazing at the planet for years before that. And the first hint that something strange was happening came from the Japanese Akatsuki spacecraft that has been orbiting Venus since 2015.

Related: Photos of Venus, the mysterious planet next door

It took a new survey of archival footage, however, to determine the cloud wall has been there since at least 1983. “We needed access to a large, growing and scattered collection of images of Venus gathered in recent decades with different telescopes,” study co-author Pedro Machado, a researcher with Portugal’s Institute of Astrophysics and Space Sciences, said in a statement.

The archival footage came from observatories including the Galileo National Telescope in the Canary Islands and the NASA Infrared Telescope Facility in Hawaii.

Enormous cloud patterns in the upper atmosphere are already well-known at Venus, including a bizarre “Y” shape that may arise from centrifugal forces, and a bow wave that could arise from air flow over static ground features like mountains. The newly discovered cloud wall, however, is at a lower altitude and in a region of Venus’ atmosphere where the greenhouse effect is quite pronounced, keeping the surface at lead-melting temperatures of 870 degrees Fahrenheit (465 degrees Celsius).

Researchers suggest the cloud wall could be linked to the mysterious and long-observed fast rotation in Venus’ upper atmosphere. The newly found feature could potentially dump enough momentum and energy to fuel the fast winds further up, lead author Javier Peralta, an astrophysicist at the Japanese Aerospace Exploration Agency (JAXA, which runs the Akatsuki mission), said in the same statement. That’s because the cloud wall zooms above the surface at jet-like speeds of 203 miles (328 km) an hour.

What causes the cloud wall is still unknown and will require further research, the team said. However, the researchers added, the feature could be an atmospheric “Kelvin” wave, a class of atmospheric gravity waves that has already been observed at Venus. Gravity waves in a planet’s atmosphere (not to be confused with gravitational waves) happen when winds move at high speed over static geological features like a crater wall or a mountain; the updraft rises and sinks in a layer of stable air just above the feature.

A study based on the research was published on May 27 in the journal Geophysical Research Letters.

While greenhouse gas emissions plummeted as the world locked down in response to the coronavirus pandemic, such dips will do "nothing" to slow...
Read more

NASA hails success of SpaceX’s 1st astronaut mission: ‘This is just the beginning’

Gadgets have become a part of our lives. It is very much commonly used for the benefits of our society. Here are...
Read more

Gadgets are becoming our everyday life essential. We have come to a point where we are surrounded by gadgets. They are making...
Read more
Technology