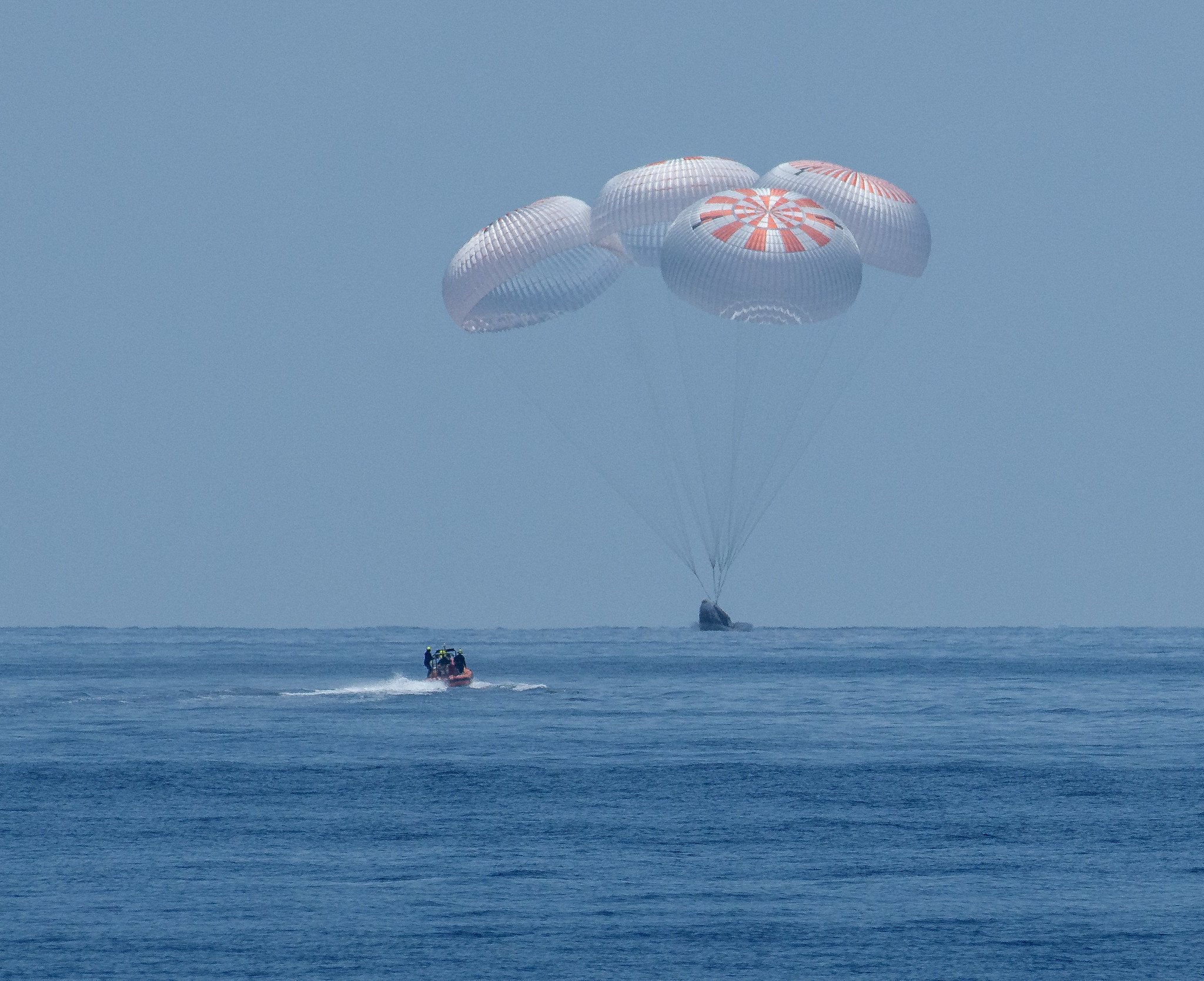 SpaceX is over the moon after the successful completion of the company’s first-ever crewed mission.

The Demo-2 test flight to the International Space Station wrapped up on Sunday (Aug. 2), when a SpaceX Crew Dragon capsule carrying NASA astronauts Bob Behnken and Doug Hurley splashed down in the Gulf of Mexico.

During a news conference Sunday after the historic landing, SpaceX president and chief operating officer Gwynne Shotwell expressed her excitement, saying that the mission’s success bodes well for the future.

“This mission was incredibly smooth,” she said. “Not to say that there weren’t things that we want to work on and do better next time, but the capsule worked beautifully.”

“We certainly feel comfortable that we’re on the right path to carry commercial passengers,” she added.

Now that the Crew Dragon capsule, which Behnken and Hurley named Endeavour, is safely back on Earth, engineers will spend several weeks combing over mission data to make sure everything went as expected.

The early returns are positive in that regard, Shotwell said.

“Based on the telemetry, and any visual indications that we’ve had so far, the vehicle looks like it’s in really good shape,” she said.

Once that analysis is complete, NASA is expected to certify Crew Dragon and SpaceX’s Falcon 9 rocket for crewed trips to orbit. Steve Stich, NASA’s Commercial Crew Program manager, estimated that the certification process could be wrapped up by the end of August.

SpaceX is contracted to fly at least six crewed missions to the International Space Station as part of its commercial crew contract with NASA. The first operational flight, known as Crew-1, is scheduled to launch in late September. But that’s not all that SpaceX has planned.

The California-based rocket builder inked a deal with Virginia-based company Space Adventures earlier this year to fly four space tourists on Crew Dragon. That mission is estimated to take off sometime in late 2021.

“This historic mission will forge a path to making spaceflight possible for all people who dream of it, and we are pleased to work with the Space Adventures team on the mission,” Shotwell said in a statement from Space Adventures in February of this year.

In photos: A behind-the-scenes look at SpaceX’s Crew Dragon spaceship

Under the agreement, four passengers will launch into orbit atop a Falcon 9. Crew Dragon will not rendezvous with the space station, however; it will circle Earth for up to five days as a free-flying spacecraft that gets higher than the orbiting lab.

“This will provide up to four individuals with the opportunity to break the world altitude record for private citizen spaceflight and see planet Earth the way no one has since the Gemini program,” Space Adventures representatives said in the same statement. (The space station orbits at an average altitude of about 250 miles, or 400 kilometers.)

SpaceX has also signed a deal with Axiom Space to ferry private astronauts into space. The Houston-based space startup has reached an agreement with SpaceX to send a total of four astronauts to the space station sometime in 2021.

The crew will include three private astronauts and one Axiom-trained mission commander, embarking on a 10-day mission to the International Space Station. The crew will be selected and trained by Axiom, with SpaceX providing the taxi service.

Axiom Space has not released details about how much the company will pay SpaceX to fly the four people to the International Space Station. In the past, however, the company has said such a flight for space tourists would cost about $55 million per seat, with the majority of that cost likely going to SpaceX for the launch vehicle and Crew Dragon spacecraft. Last year, NASA opened a path for commercial trips to the space station, saying it would charge $35,000 per person per day for private stays on the orbiting lab.

The upcoming flight and others like it to follow will be just the beginning, if everything goes according to Axiom’s plan. The company also aims to install its own commercial module on the space station and, eventually, to set up its own orbital outpost.

Axiom representatives say this is part of a two-step process the company has laid out to build and serve a growing market for access to low-Earth orbit (LEO).

“These flights, along with helping to grow and serve the demand for access to LEO in the near term, will give our operational procedures formal testing to prepare for when we begin managing flights to our own modules,” Axiom representatives said.

NASA Administrator Jim Bridenstine echoed that sentiment during Sunday’s post-splashdown briefing, explaining that the Demo-2 mission’s success is a shining example of how well public-private partnerships work and how important they are to the future of space exploration.

Shotwell expressed great optimism about the future as well.

“This is really just the beginning,” she said during the news conference. “We are starting the journey of bringing people regularly to and from low-Earth orbit and on to the moon, and then ultimately on to Mars.”

The Perseid Meteor Bathe of 2020 Peaks this night! Here is find out how to watch are living.

Our readers get actual about their problems with the AirPods Professional

The moon is turning ever so slightly red, and it's likely Earth's fault. Our planet's atmosphere may be causing the moon to rust,...
Read more

Hitting the Books: Why we’re going to by no means see the brink of the universe

The most productive offers we discovered this week: Nest WiFi, Sony wi-fi earbuds and extra

Singer-songwriter Grace Potter has kept herself busy during the COVID-19 pandemic with weekly live-streamed performances from her home in California and childhood home in...
Read more
Space

The U.S. government's search for unidentified flying objects (UFOs) is ongoing, and is part of a program called the Unidentified Aerial Phenomenon Task...
Read more

The uncommon arcade model of ‘Quake’ is now playable on PC