‘It sounds like an animal’: NASA astronauts describe the Crew Dragon re-entry experience 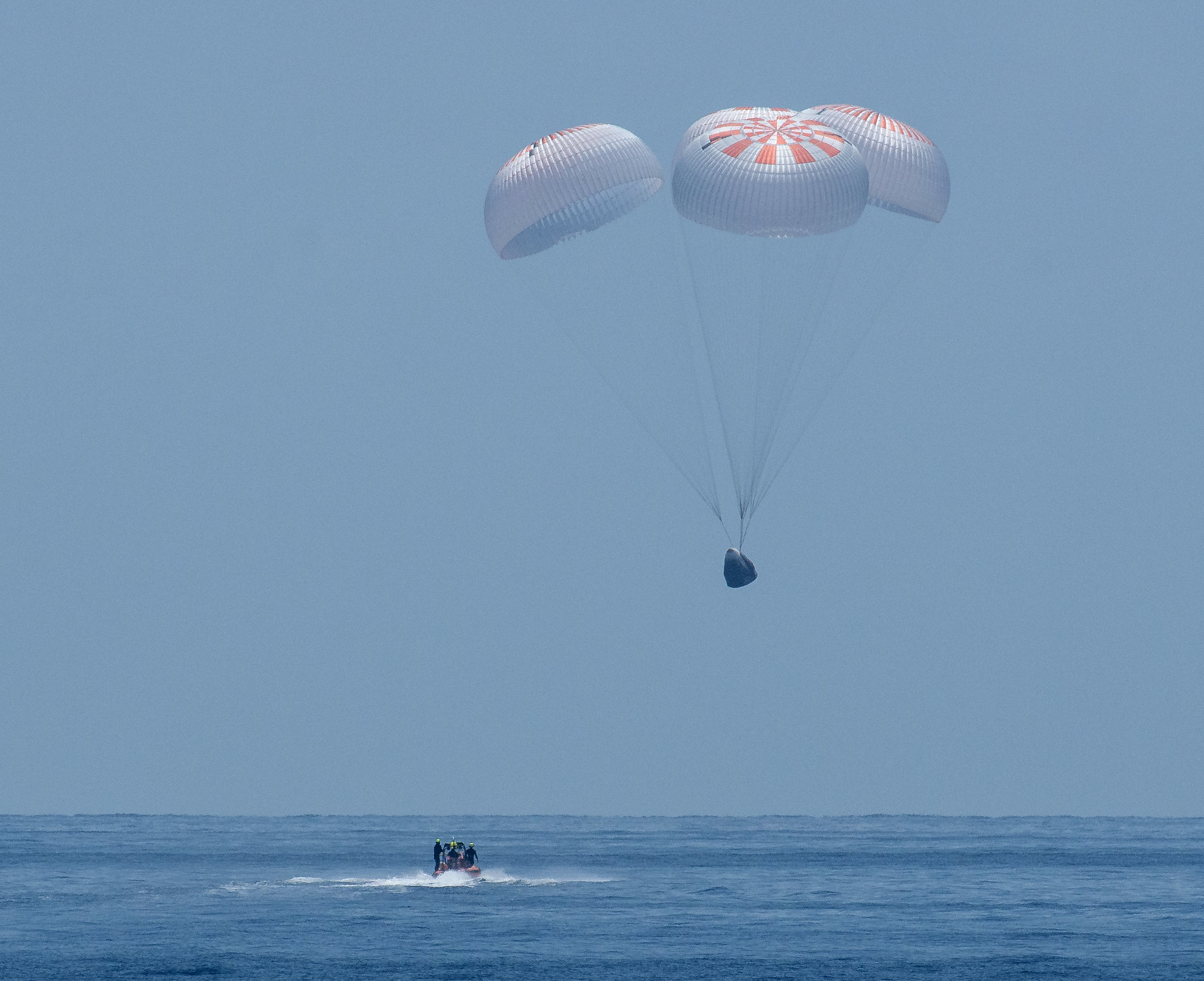 Tempting as it might have been to look out the window as Endeavour neared its splashdown off the coast of Pensacola, Florida, the astronauts elected not to do so. The only available views in the spacecraft are near the astronauts’ feet, and the spaceflyers said they felt it was best to monitor their displays rather than crane their heads.

“It didn’t seem like the smartest thing to do, as the vehicle was starting maneuvering. At that point, we were trying to make sure we were good and strapped in,” Behnken said.

The sounds and sensations were normal, expected and not unfamiliar to Behnken and Hurley. Coming into the two-month-long Demo-2, the duo already had four spaceflights between them, all of which employed NASA’s now-retired space shuttle.

SpaceX also gave the astronauts audio recordings and other information about Crew Dragon’s first trip to the space station, on the uncrewed Demo-1 mission in 2019, to learn about conditions in the spacecraft, Behnken and Hurley said today.

But Demo-2’s return to Earth was still a wild ride. Separation of the crew service “trunk” prior to re-entry felt like being “hit in the back of a chair with a baseball bat, a crack,” Behnken said. Parachute deployment produced “a significant jolt,” he added, and the crew felt the splash of the ocean before water flowed over the windows.

“You can see from just an overall view of the capsule that re-entry is a pretty demanding environment, with the scorches on the vehicle, and the windows were not spared any of that,” Hurley said.

For all the sights and sounds the crew experienced during re-entry, they missed out on an event that played before television cameras in the minutes after landing. As recovery crews worked to secure Endeavour, several dozen private boats swarmed the scene, defying orders from the U.S. Coast Guard.

The astronauts, however, could see very little outside the capsule and didn’t know of this flotilla until after they were whisked onto the SpaceX recovery ship GO Navigator and removed from Endeavour, they said.

NASA, SpaceX and the Coast Guard have all said they plan to make changes for future splashdowns to prevent a boater gatecrash from happening again, citing safety concerns. For example, after splashdown, recovery crews recorded elevated levels of nitrogen tetroxide around Endeavour, a toxic gas that could pose a risk to unprotected people who got too close. (Behnken, Hurley and the recovery crews were in no danger, NASA and SpaceX officials said, stressing that they plan for these sorts of issues.)

Hurley echoed the concern: “It can’t happen [again] like it did before,” he said of the boaters.

Hurley and Behnken said the mission otherwise went as smoothly as the best simulations they experienced, as opposed to the ones where they were taught how to deal with failures. Hurley added that he was particularly surprised that Dragon’s drogue parachutes deployed at exactly the right time, since atmospheric dynamics are hard to predict for a new spacecraft.

Hurley warned it is incumbent upon future spacecraft teams “not to get complacent” even though Endeavour performed so well. The Demo-2 astronauts will meet next week with the four-person crew of the next Crew Dragon mission, which is known as Crew-1. The coming flight, SpaceX’s first operational mission to the space station under a $2.6 billion contract with NASA, is scheduled to launch in late September.

That liftoff won’t happen, however, until NASA and SpaceX have examined the Demo-2 data in detail. Team members will do this during several weeks of routine mission debriefings, which will give them a chance to go over the minor problems and “lessons learned” the Demo-2 crew encountered.

One challenge for Crew-1 will be flying four astronauts instead of two, which is something NASA and others have tried to simulate. For example, docking procedures were simulated using four astronauts on the space station: Hurley, Behnken, NASA astronaut Chris Cassidy and Russian cosmonaut Anatoly Ivanishin.

Cassidy and Ivanishin have flown aboard Russia’s three-person Soyuz spacecraft and could bring that experience to bear in the docking discussions, complementing Behnken and Hurley’s shuttle missions, Hurley said.

The Demo-2 crewmembers added that they’re looking forward to spending more time with their families. Behnken said it is now his turn to take on the brunt of home responsibilities to support his wife, NASA astronaut Megan McArthur. She will fly aboard Crew-2 in 2021, riding aboard the same Endeavour capsule that Behnken and Hurley used.

Their own mission, Hurley added, “took years in the making. I think Doug and I have been working at it for a good solid five years at this point, and it is awesome to see it to fruition.”

Proportion your ideas in this 12 months’s XPS 13 computer

Scientists peer within Mars to measure layers of Pink Planet

A cyclone spotted in Jupiter's northern hemisphere by JunoCam in 2018.  (Image credit: NASA/JPL-Caltech/SwRI/MSSS/Kevin M. Gill )Thunderstorms on Jupiter are so strong that...
Read more
Space

SpaceX, the private space company founded by entrepreneur Elon Musk, made history in the world of privately-funded space travel with its Dragon and Crew...
Read more

Some of the best smart devices that Apple and Samsung had to offer in 2020, are in the market.
Read more

Penguins are perhaps good at hiding from people; however, they cannot cover their poop from the large satellites circling our planet.   New imagery revealed penguin poop stains on...
Read more
Gadgets

Gadgets are becoming our everyday life essential. We have come to a point where we are surrounded by gadgets. They are making...
Read more
Entertainment technology