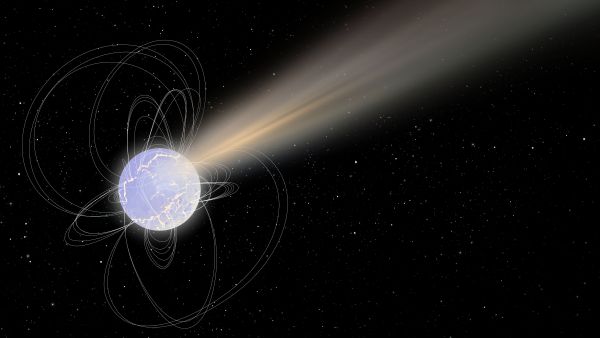 Thirty thousand years ago, a dead star on the other side of the Milky Way belched out a powerful mixture of radio and X-ray energy. On April 28, 2020, that belch swept over Earth, triggering alarms at observatories around the world.

The signal was there and gone in half a second, but that’s all scientists needed to confirm they had detected something remarkable: the first ever “fast radio burst” (FRB) to emanate from a known star within the Milky Way, according to a study published July 27 in The Astrophysical Journal Letters.

Since their discovery in 2007, FRBs have puzzled scientists. The bursts of powerful radio waves last only a few milliseconds at most, but generate more energy in that time than Earth’s sun does in a century. Scientists have yet to pin down what causes these blasts, but they’ve proposed everything from colliding black holes to the pulse of alien starships as possible explanations.  So far, every known FRB has originated from another galaxy, hundreds of millions of light-years away.

This FRB is different. Telescope observations suggest that the burst came from a known neutron star — the fast-spinning, compact core of a dead star, which packs a sun’s-worth of mass into a city-sized ball — about 30,000 light-years from Earth in the constellation Vulpecula. The stellar remnant fits into an even stranger class of star called a magnetar, named for its incredibly powerful magnetic field, which is capable of spitting out intense amounts of energy long after the star itself has died. It now seems that magnetars are almost certainly the source of at least some of the universe’s many mysterious FRBs, the study authors wrote.

“We’ve never seen a burst of radio waves, resembling a fast radio burst, from a magnetar before,” lead study author Sandro Mereghetti, of the National Institute for Astrophysics in Milan, Italy, said in a statement. “This is the first ever observational connection between magnetars and fast radio bursts.”

The magnetar, named SGR 1935+2154, was discovered in 2014 when scientists saw it emitting powerful bursts of gamma rays and X-rays at random intervals. After quieting down for a while, the dead star woke up with a powerful X-ray blast in late April. Sandro and his colleagues detected this burst with the European Space Agency’s (ESA) Integral satellite, designed to capture the most energetic phenomena in the universe. At the same time, a radio telescope in the mountains of British Columbia, Canada, detected a blast of radio waves coming from the same source. Radio telescopes in California and Utah confirmed the FRB the next day.

A simultaneous blast of radio waves and X-rays has never been detected from a magnetar before, the researchers wrote, strongly pointing to these stellar remnants as plausible sources of FRBs.

Crucially, ESA scientist Erik Kuulkers added, this finding was only possible because multiple telescopes on Earth and in orbit were able to catch the burst simultaneously, and in many wavelengths across the electromagnetic spectrum. Further collaboration between institutions is necessary to further “bring the origin of these mysterious phenomena into focus,” Kuulkers said.

House pictures: Probably the most wonderful photographs this week!

Satellites caught images of the devastating explosion this week in Beirut, a NASA spacecraft caught Mars' ''nightglow'' and a Japanese spacecraft peered below Venus'...
Read more

Today, we're giving you another chance to have your astronomical questions replied through astrophysicist Joe Pesce.  Not long ago, Dr. Joe...
Read more

Lurking just below the atmosphere of Venus is a wall of acid clouds that whip around the planet at speeds close to that...
Read more

The full moon of August arrives on tonight (Aug. 3), after the moon makes a close pass to Jupiter and Saturn in the...
Read more
Space

Google delays shutdown of beef up for local Chrome apps

Have I Been Pwned’s code base can be open sourced

Our solar system's protective bubble may not be comet-shaped after all.  Scientists have traditionally posited that the heliosphere, the huge bubble of charged particles that the...
Read more
Gadgets