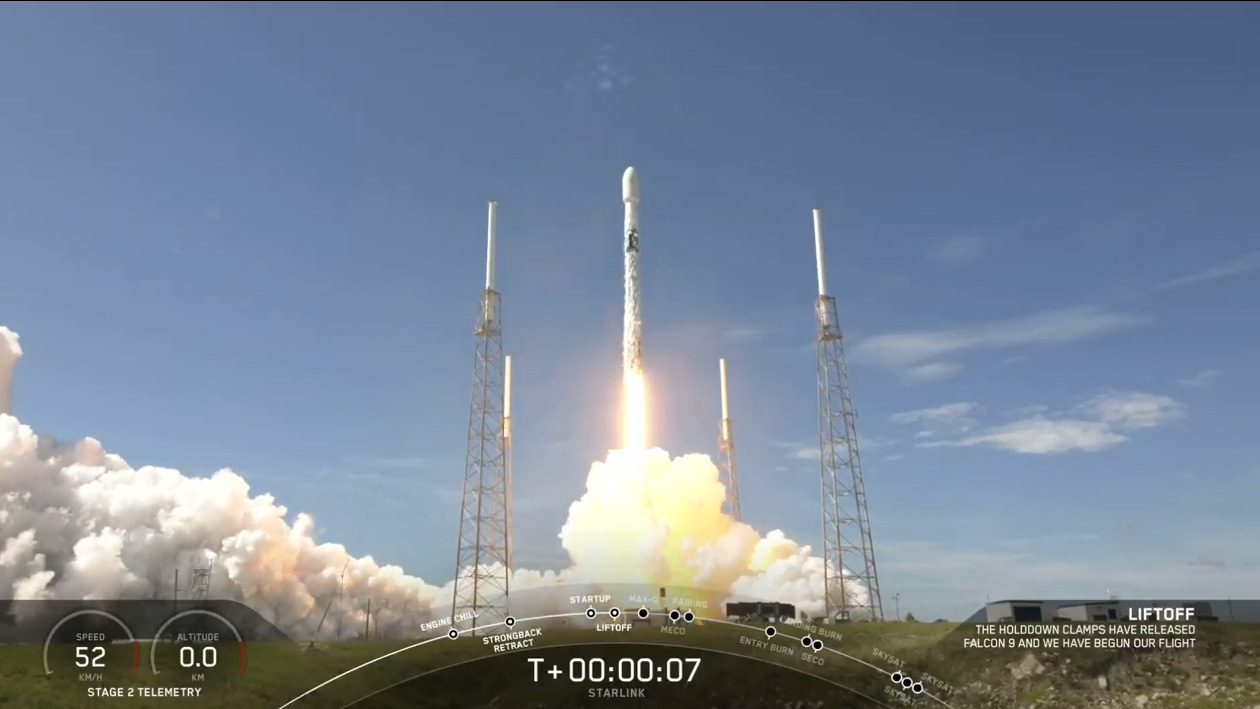 SpaceX’s hopes for a Falcon 9 rocket launch doubleheader this weekend have been thwarted by Mother Nature.

Bad weather forced SpaceX to call off its planned launch of 60 Starlink internet satellites from Pad 39B of NASA’s Kennedy Space Center in Florida this morning (Aug. 30) even as the company counts down toward a second launch from the nearby Cape Canaveral Air Force Station tonight. The Starlink launch was targeted or 10:12 a.m. EDT (1412 GMT).

“Standing down from today’s launch of Starlink due to inclement weather during pre-flight operations,” SpaceX representatives wrote on Twitter. “Next launch opportunity is Tuesday, September 1 at 9:29 a.m. EDT, pending Range acceptance.”

With Starlink delayed, SpaceX will now focus on tonight’s launch of the SAOCOM 1B radar Earth-observation satellite for the Argentina’s space agency, the Comisión Nacional de Actividades Espaciales (CONAE). SAOCOM is short for Satélite Argentino de Observación COn Microondas (Argentine Microwaves Observation Satellite). The mission has been delayed since March due to the ongoing COVID-19 pandemic.

The launch is scheduled for 7:18 p.m. EDT (2318 GMT) from Space Launch Complex 40 at CCAFS and include the launch of two small rideshare satellites: the GNOMES-1 weather satellite by PlanetiQ and the Tyvak-0172 nanosatellite built by Tyvak Nano-Satellite Systems.

You can watch that launch live here and on the Space.com homepage, courtesy of SpaceX. SpaceX’s webcast will begin about 15 minutes before launch. You can watch the launch directly from SpaceX here.

If SpaceX had managed to launch two Falcon 9 missions today, it would have been a first for the company and the first dual launch from Florida since Nov. 11, 1966, when NASA launched the Gemini 12 crew and a docking target 99 minutes apart from different pads, according Spaceflight Now, which cited this launch log by astronomer Jonathan McDowell of the Harvard-Smithsonian Center for Astrophysics.

SpaceX will launch the SAOCOM 1B mission into a polar orbit, a rare trajectory for Florida launches as most launch from California’s Vandenberg Air Force Base. The last polar-orbit launch from Florida was in 1969, according to Spaceflight Now.

SpaceX aims to recover the Falcon 9 rocket’s first stage with a landing at the company’s Landing Zone 1 at Cape Canaveral Air Force Station.

Boston Dynamics trains Spot the robotic canine to fee itself

Netflix leads the pack on the SAG Awards with 30 nominations

Spin will check scooters with faraway parking functions this spring